The origin of the company NAKATA KOGEI goes back to the general store "NAKATA KANAME Store" started by Yotaro Nakata in Toyooka-shi, Hyogo Prefecture in 1917.

Yotaro's son Toshio (the founder of NAKATA KOGEI) succeeded the business in 1946. In the same year, he met with a craftsman and they started making hangers. Toshio made decisions to specialize in hangers and established NAKATA KOGEI Co., Ltd. Toshio peddled hangers to tailors in Osaka and Kobe to find business opportunities. Around 1950, a tailor introduced a department store to Toshio and they started business dealings. In this way, NAKATA KOGEI's hanger production started by the founder Toshio's meeting with the craftsman. 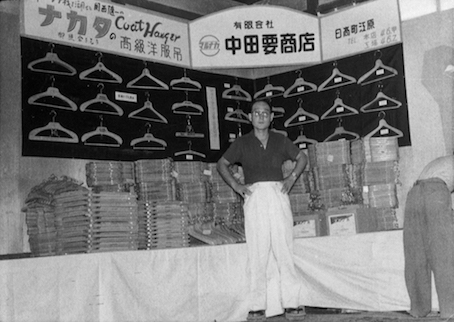 Started by the founder Toshio's meeting with the craftsman.
1950

Specialized in hangers to display clothes

While apparel and mannequin companies have sprung up one after another in western Japan in the 1950s, NAKATA KOGEI came to make hangers for business use more and more. 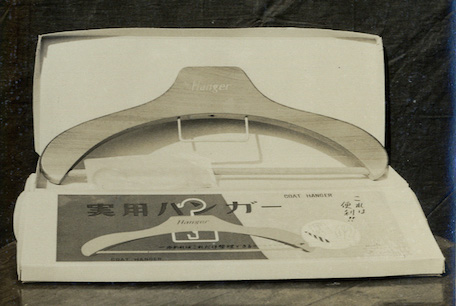 In the 1960's, NAKATA KOGEI's woodworking skills were further refined. Until then, flat hangers were the mainstream, but we started to make curved and thick hangers. NAKATA KOGEI expanded product lineup, improving skills of lathe and flush wood boards.

Distribution throughout the country

In the 1970's, NAKATA KOGEI started dealing with companies in Tokyo and making retail hangers sold at mass retailers and department stores.

Japanese apparel companies demanded very high level of quality, and they were very particular about their orders unlike any other in the world. There were various demands such as the hanger shapes, finishing colors, and how to put brand logos. NAKATA KOGEI kept responding to the demands respectfully, and accumulated skills and knowledge of wooden hangers.

This was Toshio’s favorite phrase. (The words "clothes" and "happiness" are a pun in Japanese.)

In the train going to and from Tokyo, he said, "I want every house you can see from here have at least one of our hangers." However, at that time, he did not have a way to sell hangers directly to general consumers.
However, Toshio's thought, "Hanger is an item to hang clothes and happiness" will be fullfilled over time. The idea was taken over in our brand's concept and NAKATA KOGEI's hangers are currently used as gifts too. 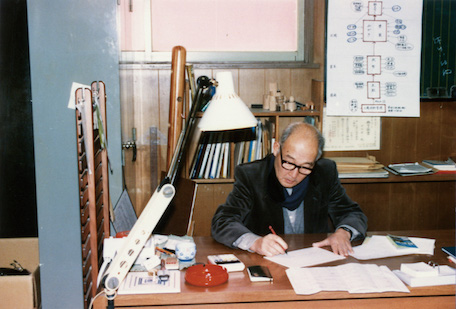 In 1981, Toshio's son Koichi Nakata joined NAKATA KOGEI.
In order to make a hanger that fits the suit perfectly, we started to develop a three-dimensional hanger in collaboration with a designer. Since then, this hanger has become popular as a standard of suit and jacket hangers, and has been used by many tailors and apparel brands. While making improvement, the hanger later became the most popular model as "Authentic-05".

In 1980s, the trend of DC brands reached the peak of its popularity. (The DC (Designer's & Character's) brands are the apparel brands that became a social trends in Japan around 1980s.) There were no bounds to the demands for hangers.
A lot of orders kept coming one after another, and the hard days continued in order to meet the deadlines.

The company grew rapidly and the number of employees exceeded 120. In 1984, Iwanaka Factory was newly built to meet a lot of demands. The reconstruction of the head office has also started, and all functions of the company were moved to the Iwanaka factory temporarily.

In 1985, Toshio was recognized as having engaged in the clothes rack industry for many years and awarded the Yellow Ribbon Medal by the Emperor. Toshio was pleased, saying "Hangers have not been well recognized. Even toothpicks and chopsticks have annual statistics by the Ministry of Finance, but hangers don't. Now hanger has finally been recognized as a product."
In the same year, when Queen Elizabeth of the British royal family visited Japan, a classical and luxurious hanger made by NAKATA KOGEI was delivered to the State Guest House.

In 1986, we started trading with a Taiwanese hanger manufacturer and started importing wooden hangers. We didn't have an intention to import hangers cheaply, but simply sought out overseas from a quest for hangers. With the company we met at the time, we have built an excellent relationship as a partner company for more than 30 years.
There are hangers overseas that have different designs and materials from hangers in Japan. We have expanded the range of products by actively incorporating them. 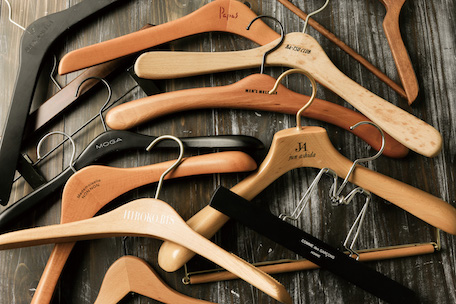 A hardship due to the collapse of Japanese economy

In the mid 90's, many hangers made in China were used all over the country. The price of conventional domestic products became difficult to compete in the marketplace. Other companies in the same industry gradually disappeared as manufacturing activities were finished. NAKATA KOGEI became the only company in Japan that specialized in the production of wooden hangers.

Restructuring the production and sales

Taking advantage of having factories domestically and overseas, we started our own standard product series. We achieved low price products while meeting the customer's requests and specifications.

As a new business other than hangers, we started to produce wooden toys and kitchen utensils.

When the Great Hanshin-Awaji Earthquake struck in January 1995, we took the edge materials of wooden hangers to Kobe and provided them as firewood to take warm.

We made our own website in 1997 and three years later opened an online shop. Customers started to order hangers directly through the website. 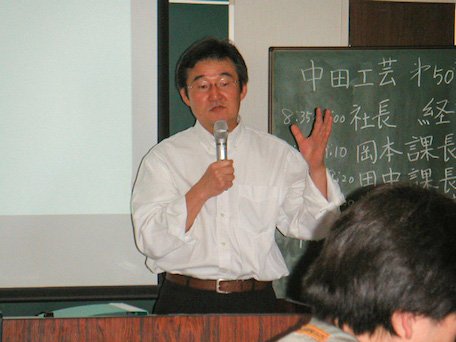 We launched our online shopping site "Hanger Network" in 2000. We reconsidered our products from the customer's point of view and posted various information.

An extremely large typhoon hit Toyooka-shi in the autumn of 2004. The Maruyama River overflowed and almost all of the factory was flooded. The factory was rebuilt and the entire production was remodeled. It took three months to restart the hanger production.

The launch of NAKATA HANGER

In July 2007, we opened a showroom in Aoyama, Tokyo. At the same time, we launched our own brand "NAKATA HANGER", which is also used for the showroom's name. Having the first retail store we had long wanted, we started to sell hangers for individuals.
We concentrated all of our knowledge, skills, and experiences for the strong commitment to the quality. We have set the concept of "high quality wooden hangers made in Japan" in order to make a clear distinction from mass-produced hangers. NAKATA HANGER became the first store in Japan that specialized in hangers. 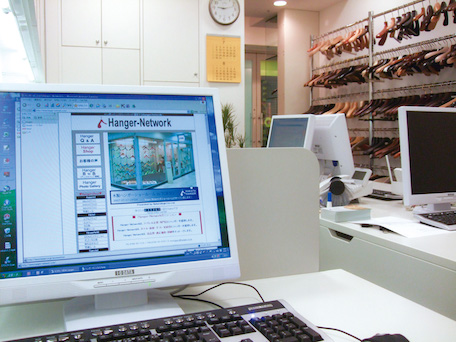 The Challenges in new fields

While the company NAKATA KOGEI has kept the main business fields in the apparel and commercial use, the brand NAKATA HANGER introduced the high quality hangers to the new fields such as household and gift use. The showroom also plays an important role as a place to have business meetings with apparel companies and young designers who want to create hangers of their own designs. The skills and experiences gained by responding to their requests are the source to create values in new fields.